Since I got my Asus eee I've been continually swapping distros, since the preinstalled Xandros wasn't cutting it. Until now I've had Ubuntu, Ubuntu-eee, eeebuntu, Mandriva, Debian... and the list could go on.

Nothing to say, all great, stable & clean distros. And then came crunchbang, with it's spinoff cruncheee. Watch this: 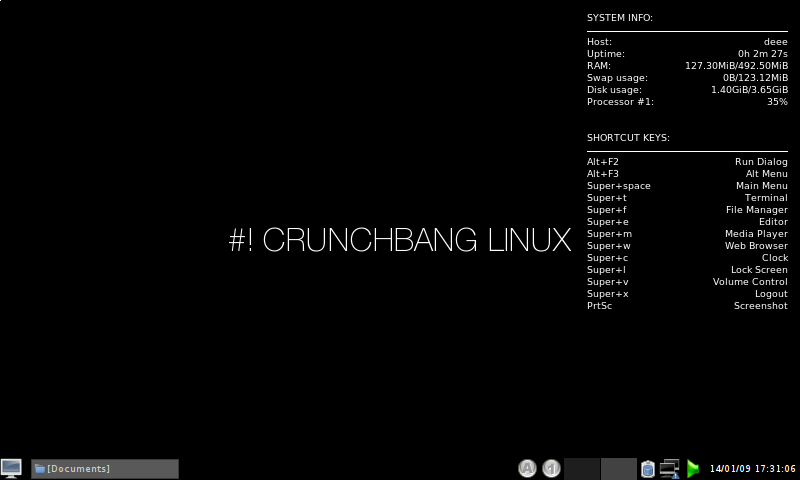 The install iso is smaller than 500 megs, so it really lost some fat compared to the other distros. The installation is quick and painless, thanks to Ubiquity (Ubuntu's installer, since crunchbang is a derivative of Ubuntu).

After you install you get a lean and mean sistem, with a minimal suite of apps. Personally I don't like to use a standalone mail client, a clipboard manager and some other applets, so Clawsmail, Parcellite and some other stuff was out. Also, I replaced the NetworkManager applet with Wicd.

Still, after adding some stuff to the tray, like the software keyboard leds, it still used 128 megs of ram, which is great.

The keyboard shortcuts are absolutely great, and the list in conky makes for a steep learning curve.

I also updated all the apps, added the build-essential package, abiword for minimal text editing, gimp for photo editing and FBReader for e-books and the install size is about 1.3Gb.

So, if you fancy my office-oriented crunchbag/cruncheee remix (well, at least for the time dropbox will put up with me), get it here: